Another year of MOPS (Mothers of Preschoolers) is about to begin, and I have volunteered to be a group leader this year. When I first became a mom, I never would have thought that I would’ve found such an amazing group of women or that I would feel comfortable enough with a group to volunteer to be a leader amongst them. The journey to finding mom friends can be tough with a lot of self-doubt mixed with only occasional bursts of self-confidence. I thought I would share my funny (and kind of pathetic) journey to finding my mom tribe since we are all embarking on a new “school” year and in essence starting brand new.

Making friends is hard, and it gets harder the older we get because not only are you not forced into social situations like at school but everyone starts developing very distinct personalities and ways of life. I remember when we first moved to Colorado; I had no clue how to make friends. I was missing my Midwest friends, and to be honest I was super annoyed that I even had to put myself in the situation to make friends all over again. We lived in an apartment, and I didn’t have a job yet. Being an introvert, I wasn’t about to seek people out. Little did I know that nine months later the little baby boy that brought me so much happiness would also bring me many new friends because motherhood is a really cool club to be in.

We moved into our new house in a newly established neighborhood in a town that was new to us when my first son was 2 months old. I didn’t know a single person (I wish I was exaggerating). I was still trying to figure out how to be a mom so the idea of setting up playdates or finding moms with similar-aged kids was very overwhelming. After a long four months of really only taking R to the store and back, I finally got up the courage to post on our neighborhood Facebook page about taking him to the library’s holiday story times and asking if anyone else was interested. The replies rolled in, and I was so excited; I was going to meet other moms, get to know people in the neighborhood, and hopefully find some playmates for my 6 month old (can they even play at that age?). The morning of story time, I was giving myself little pep talks and put R in a cute holiday onesie. We drove to the library, and as we are pulling into the parking lot I can hear my son pooping, red face and all. Ugh, good timing buddy.  No big deal, I’ll just take him straight to the bathroom and change his diaper. So, I carried him up the stairs, straight to the bathroom, get ready to change him, and there in front of me was the biggest blowout he had ever had. It’s like he was trying to spite me for forcing him to make friends. His onesie could no longer be worn, his pants were just gross, and even his socks had poop on them. And me being mom of the year – I forgot to pack extra clothes in the bag AND I only had 2 wipes. I was so fixated on needing to make friends and interact with someone other than an infant that I was not going to be defeated by a little poop.  I wiped him down with wet paper towels, and for a few minutes I stood in the bathroom seriously considering wrapping him up in his car seat blanket and taking him to story time in just his diaper and blanket – not really weather appropriate. Finally though, I surrendered, and I wrapped him up in his blanket, carried him back to the car and we went home. I posted a lame excuse on the Facebook page.  I felt so defeated and alone. 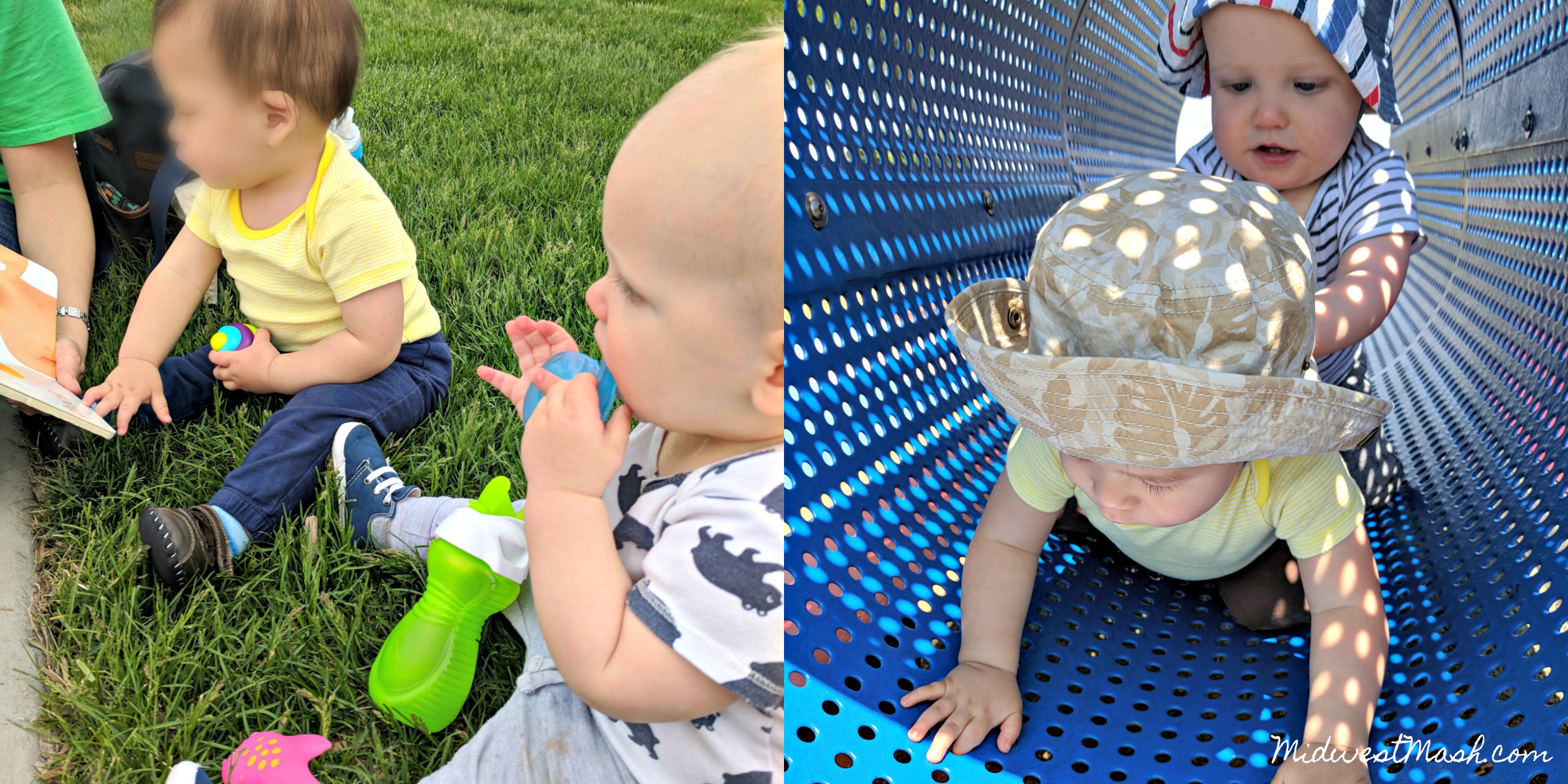 Thankfully, we tried story time again after the holidays without all of the chaos and stress of trying to invite other people (and with a lot less poop), and I ended up randomly meeting my now best friend whose son is only 6 weeks older than mine ↑. Looking back, I feel like it was a good lesson for me. I needed to quit trying so hard and being uptight about not having friends. When I took a step back and decided to do things my own introverted way it led to finding friends who had similar personalities. Now when we go to parks or the library, I make more of an effort to talk to other moms because you never know who is going through the same thing I was a year and a half ago. Motherhood can be a lonely place, but when you finally find your mom besties it is the most comforting feeling in the world. ♥

Hang in there new moms, you’ll find your people and life will be infinitely easier. I would highly recommend seeking out your local MOPS chapter if one is available. I know every town and chapter will be different, so I can only vouch for the awesomeness of mine but it’s worth a try!